Contents : The Evangelical Review of Society and Politics Vol. 3, No. 1 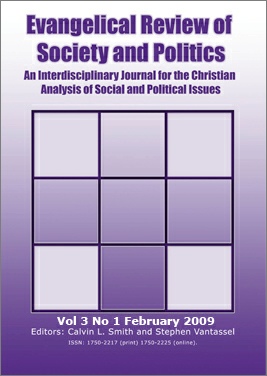 THE EVANGELICAL REVIEW OF SOCIETY AND POLITICS
VOL. 3, NO. 1, FEBRUARY 2009

ABSTRACT
The concept of foreignisation in translation studies was given fresh impetus in an influential 1995 publication by Lawrence Venuti titled The Translator's Invisibility, which has since become established as one of the key texts in the field. Venuti's usage of the word "invisibility" refers to the prevailing position and methodology among contemporary British and American translators for an ethnocentric, domesticating translation strategy. For the most part, Venuti explored the translation of foreign texts into English but this article considers another aspect: the translation of the Bible by Western translators into minority languages. Venuti's overall package of translation ethics - together with important contributions from German functionalists in the form of skopos theory - provides some important reminders for the development of vernacular Bibles in minority cultures. This article is especially relevant to Evangelicals interested in how aspects of cultural studies have introduced new concepts relevant to the practice of Bible translation . More widely, this paper may also be of interest to Evangelicals engaged in cross-cultural ministry.

Raymond Pfister, “Does Europe Matter? Towards a European Agenda for the Church in the 21st Century.”

ABSTRACT
This article looks at a European agenda for the Church in the 21st century from a Pentecostal-Charismatic perspective with reconciliation as the new paradigm for mission. Europe and the Church are facing similar issues in terms of challenges and ideals. Both are heirs of divisions, yet aspire for unity. Both share a history of wars, discrimination and dissensions and both are longing for peace, justice and solidarity. Because the ministry of the Spirit is a ministry of reconciliation, movements within the Church with a strong emphasis on the Holy Spirit have both the potential and the duty to renect on their contribution to the making of Europe.

ABSTRACT
This article explores the tension between the powerful rich and the vulnerable poor in the book of James. Attention is given to some practical lessons for these persons in the Christian community, then and now. James advocates a faith that works, empowercd and guided by the royal love commandment that intertwi nes love for God and love for the neighbor. The article challenges a type of practical atheism that amounts to a "do-thing" policy and practice towards the needs of the vulnerable poor.

ABSTRACT
In recent years, various supercessionist responses to the modern State of Israel have tended to focus on the biblical theology theme of the land and its relative silence in the New Testament, concluding this theological relegation of the land directly challenges Christian Zionist support for modern Israel. This paper offers an alternative approach, focusing instead on the viability of the house of Israel as a biblical theology theme, with substantial representation in both the Old and New Testaments, which challenges how some supercessionists view the Jewish state. Moreover, it is argued that a focus on the people rather than the land also paves the way for pro-Israel Christians to engage with the concept of exchanging land for peace on other than exclusively theological grounds.

Jeffrey W. Robbins and Neal Magee (eds), The Sleeping Giant Has Awoken: The New Politics of Religion in the United States.
Reviewed by Amos Yong.

Meic Pearse, The Gods of War: Is Religion the Primary Cause of Conflict?
Reviewed by Stephen M. Vantassel.

William Hasker, The Triumph of God Over Evil: Theodicy for a World of Suffering.
Reviewed by Bradford McCall.