Contents : The Evangelical Review of Society and Politics Vol. 1, No. 2 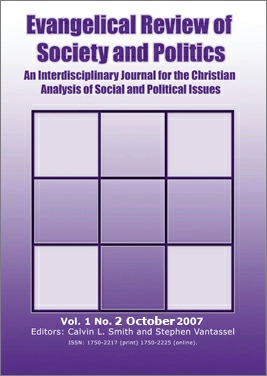 THE EVANGELICAL REVIEW OF SOCIETY AND POLITICS
VOL. 1, NO. 2, OCTOBER 2007

Paul Alexander, “Speaking in the Tongues of Nonviolence: American Pentecostals, Nationalism, and Pacifism”

ABSTRACT
I analyze early Pentecostals who critiqued nationalism and war in order to encourage and refine a contemporary Pentecostal peace witness. First, I relate the anti-c1assist, anti-racist, and anti-sexist protest theology of glossolalia at Azusa Street and beyond to internationalism (anti-nationalism) and pacifism (anti-war). Second, I reveal the significant critique of nationalism (ethnos) that existed among first generation Pentecostals and show that it correlates with a critique of racism (ethnos). Third, by using primary sources I suggest that pacifism constituted a deeply and broadly integrated belief in the early American Assemblies of God in particular and in Pentecostalism in general. Finally, based on this "usable past" I present a constructive sketch of what a 21st century prophetic, non-nationalistic, nonviolent, Spirit empowered peace witness might entail.

Stephen M. Vantassel, “Should Wildlife Trapping Have a Place in a Christian Environmental Ethic?”

ABSTRACT
Animal protectionist groups lobby for the banning of wildlife trapping because of its perceived cruelty and harm to the environment. This paper evaluates those claims and suggests that Christians carefully consider all the data before adopting an anti-trapping stance.

ABSTRACT
The highly volatile ongoing tactics of illegal abortion protest movements are typically proclaimed by proponents to be biblically sound and, in fact, biblically mandated. Taking just the opposite point of view, this article documents the wrongfulness of these illegal tactics as they actively violate two major biblical principles regarding obedience to civil authority and exclusiveness of parental authority. Parents and civil government are, in actuality, the primary law-breakers in that they have failed to act consistent with their biblically ordained responsibilities. An alternate, biblically consistent rescue tactic is proposed, along with the proposition that others may be "more" in need of rescue than are innocent aborted babies.

Melanie Phillips, Londonistan: How Britain is Creating a Terror State Within.
Reviewed by Chris Lazenby.

Gary Burge, Whose Land? Whose Promise? What Christians Are Not Being Told About Israel and the Palestinians.
Reviewed by Calvin L. Smith.

H. Stephen Shoemaker, Being Christian in an Almost Christian Nation: Thinking About Faith and Politic.
Reviewed by Jon DePriest.